#BerlinforIndia stands in unconditional solidarity with AG Trostfrauen, Berliner Korea Verband, survivors of rape and sexual violence and other activists agitating against the removal of the “comfort women” memorial statue in Mitte. We as a political group in the city committed to fighting for the dignity of victims and survivors of rape, understand this act on the part of the city administration as one of disrespect, rape apologia for the sake of international diplomatic ties with Japan, and an attempt to erase the right of victims and survivors of rape and sexual violence to mourn and heal. We sit with you.

The statue reminds of the fate of hundreds of thousands of girls and women who were abducted by the Japanese military during the Asia-Pacific War (1931-1945) and sexually enslaved as so-called “comfort women”. Women’s movements in China, Indonesia, the Philippines, Japan, South Korea and around the world have jointly protested against this form of sexual violence. The ‘comfort women’ are internationally recognized as courageous campaigners for the condemnation of rape in war under international law. The UN Conference on Human Rights in Vienna in 1993, the UN Conference on Women in Beijing in 1995 and Resolution 1325 of 2000 defined sexual violence in war as a crime against humanity.

Sexual violence against women and girls is almost uniformly a consequence of war and imperialism everywhere. In India, women and other non-cis-men have to live under particularly oppressive rape culture, and rape and sexual violence is a tool to discipline and punish women especially along lines of caste, class and religious and regional identities. We recently demonstrated in solidarity with the victim of the Hathras gangrape in Uttar Pradesh, and their family. In the light of our activism towards acknowledgement, reflection and dismantling of rape culture, justice and dignity for victims, survivors and families facing sexual violence we extend our solidarity towards our comrades. We cannot stand by as the memory of cruelty of Japanese imperialists to over 300000 women of Korea, China, and Philippines is erased in the name of international diplomacy. 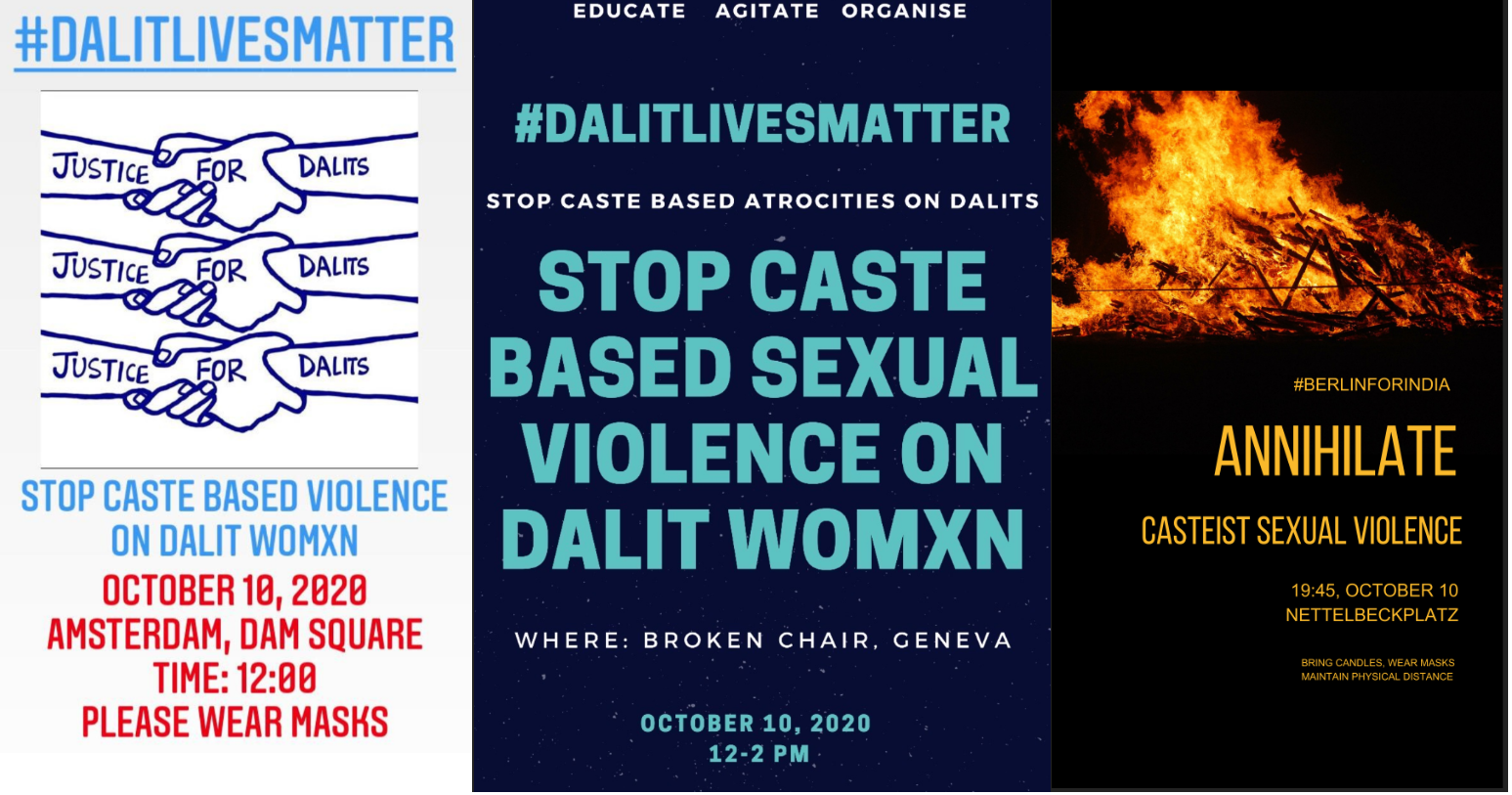 Join us on Saturday at 19:45 at Nettelbleckplatz to protest the continued failure of the government of India to protect the victims of caste-based sexual violence.

As Dalit women are gangraped by upper caste men, in particular Thakur, in Uttar Pradesh, the government of the state is most focused on destroying evidence of wrong-doing and on foisting false cases on journalists, human rights activists, and political opponents, a technique that the BJP-ruled government at the Centre has perfected through the Bhima-Koregaon cases and the Delhi “riots” cases.

This gathering will abide by all applicable Corona regulations. In particular, please wear a mask at all times and maintain physical distance of at least 150 cm from other participants at the gathering. 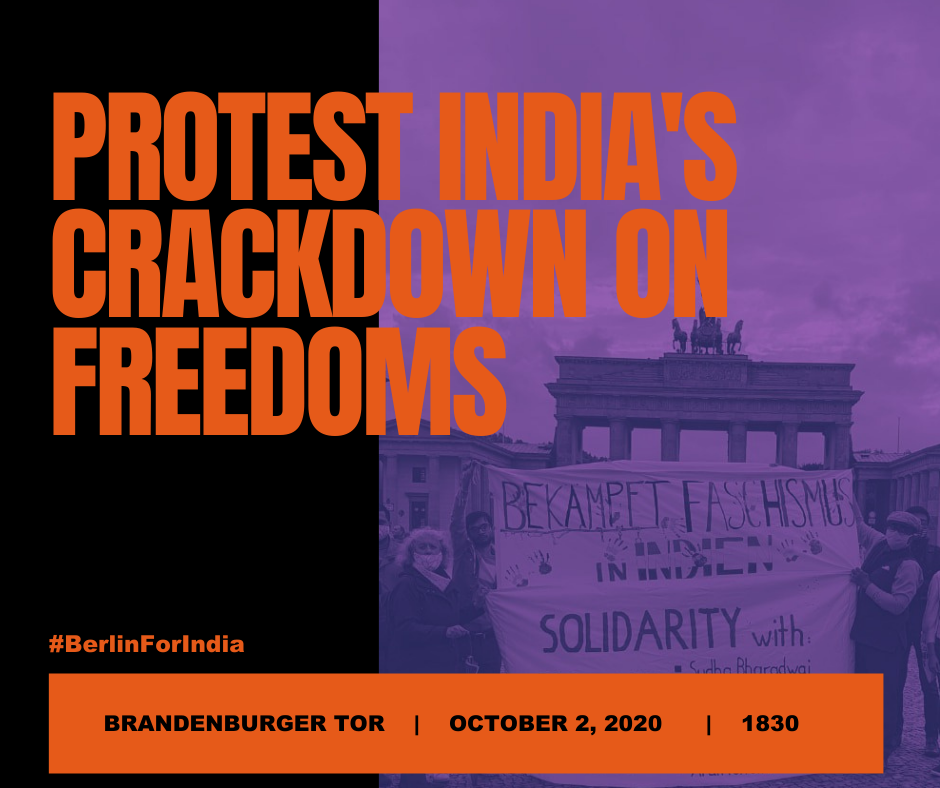 Even as violent crimes against minorities, oppressed castes, and women have become an everyday affair, the government of India has left no stone unturned in its suppression of dissenting voices.

The country’s Prime Minister Narendra Modi and Home Minister Amit Shah have dedicated themselves in support of the idea that Hindu men of the dominant castes, Brahmins being the most dominant, are entitled to reign over the country’s minorities. Human rights, constitutionally-protected rights, social justice, and legislative procedure have been but minor inconveniences, readily swatted away in pursuit of these political goals.

The country’s marginal farmers, students, workers, OBCs, Dalits, Adivasis, Muslims, womxn, trans people, other minorities and the colonised state of Kashmir and it’s people have been sacrificed at the altar. On October 2, we gather in solidarity with the victims and survivors and stand against the upholders of Hindutva and Hinduism/Brahminism.

Why did we protest almost non-stop between December 2019 and April 2020?
Watch this video in Deutsch: https://www.youtube.com/watch?v=Fn46uuCkGiw
Or read this English explainer https://berlinforindia.org/wp-content/uploads/sites/10/2020/01/FlyerJan11.pdf

Read about the Indian government’s crackdown on pro-secularism activists: https://berlinforindia.org/wp-content/uploads/sites/10/2020/05/StatementMay24v2.pdf

Read about the Indian government’s witch-hunt of academics and activists in the Bhima Koregaon – Elgar Parishad case
https://berlinforindia.org/wp-content/uploads/sites/10/2020/08/StatementAug18Final_BhimaKoregaon-.pdf

Read about the latest amendments to the foreign contributions law, which will throttle civil society in India:
https://thewire.in/government/foreign-contribution-regulation-amendment-bill-2020
https://www.livemint.com/news/india/india-s-crackdown-on-ngos-in-four-charts-11601363086584.html

We stand in solidarity with victims of the shooting which took place in Hanau on the 19th of February, 2020. Today marks six months since the attack,and grieving families and friends of the victims are still waiting for the German state to take decisive political actions against racism. What happened in Hanau was not an isolated incident. Right-wing terror and structural racism continue to be tolerated and accepted in Germany.

Tobias Rathjen, a 43-year-old white German national, entered two shisha bars in the city in the late evening, gunned down nine civilians and injured five others. The targeted bars had mostly been frequented by people of Turkish descent and those killed were from Kurdish, Sinti, Afghan, Turkish, Bosnian, Bulgarian and Romanian backgrounds. Four of them were German citizens. Ferhat, Fatih, Gökhan, Kaloyan, Mercedes, Vili, Nesar, Hamza, and Sedat: we continue to remember them.

The fact that Rathjen chose to attack bars frequented by People of Color(PoC) and with non-German backgrounds speaks volumes about the motivation behind these attacks. In the aftermath of the attacks, his personal website carrying his life story and ideology was removed. A 24-page statement which had been uploaded on the site not too long ago detailed at length his hatred towards ethnic minorities in Germany and the need to “completely annihilate” people of certain African, Asian, and Middle Eastern origins. This desire is also not an isolated one in the history of racism and its attendant practices of genocide, enslavement, super-exploitation, and segregation.

As People of Color with South Asian backgrounds living in Berlin, we acknowledge that the continuum of right-wing violence extends over our existence here. At the same time, we want to acknowledge the drastic increase in physical and institutional violence against minorities, especially Muslims, Dalits, “backward” classes, cisgender women, transgender women, and transgender men that has been a constitutive factor in the everyday governance and policymaking in India under the current political dispensation. The most flagrant example of this has been India’s settler- colonial project in Kashmir, which has been accelerated following the abrogation of the Article 370 of the Indian Constitution exactly one year ago. Article 370 represented the constitutional compact between the Indian state and Jammu and Kashmir (J&K), granting semi-autonomous status to the region until a referendum would be conducted in that region for self-determination as to whether J&K wanted to become an independent nation or integrate with India or Pakistan. This referendum never took place. Instead, an indefinite lockdown was imposed on Kashmiris in august 2019, whereby thousands were arrested, hundreds reported torture, and this process continues as capital interests and fascist demographic policies seek to occupy the land, extract value, and subjugate Kashmir’s Muslim-majority population.

In addition, we have had to witness the endless lynchings and upper caste mob violence against Dalits, proactive efforts to get rid of affirmative action for the so-called “other backward classes(OBCs) in education, passage of the regressive Transgender Persons (Protection of Rights) bill and the passage of the CAA-NRC-NPR bills which was followed by brutal state crackdown on dissent and the anti-Muslim pogrom in North East Delhi earlier this year.

As we agitate for the citizenship rights of India’s Muslim population and rights of other minorities in India, we cannot be blind to violent attacks on minorities in other parts of the world, especially in Germany. We show our strongest solidarity with the victims of the Hanau murders and their families as we acknowledge that anti-minority sentiment is the fulcrum of current right-wing ideologies globally. We condemn in the strongest terms the complete impunity and complicity of national governments in normalizing such violence, dismissing and silencing the communities that face it, and covertly and overtly rewarding and supporting the perpetrators by stymying processes of justice and accountability.

We hope to keep up the struggles for accountability and justice for victims of racist and majoritarian violence anywhere it unfolds. We support migrant, (Black, Indigenous, People of Color (BIPOC) self-organization and self-determination in Germany and beyond. We extend our support to the call for demonstration and for commemoration in Hanau on 22.08.20 by the Institute for Tolerance and Civil Courage – 19 February Hanau e.V. (Institut für Toleranz und Zivilcourage – 19. Februar Hanau e.V.) and the Initiative 19 February Hanau (Initiative 19. Februar Hanau).

‘Berlin for India’ strongly condemns the ongoing witch-hunt in the Bhima Koregaon case. In particular, we condemn the latest round of intimidation and arrests of academics teaching at the University of Delhi. 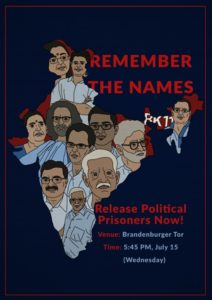 Condemn the brutal crackdown on dissent and protest that has accompanied India’s COVID-19 lockdown! Gather at Berlin’s Brandenburger Tor to remember those illegally detained and mark your protest against their incarceration.

The government of India, led by Prime Minister Narendra Modi and Home Minister Amit Shah have used the Covid-19 lockdown to launch a brutal crackdown on dissent and protest. Students and activists who participated in the country-wide protests against the discriminatory, illegal, and inhuman changes to the secular basis for citizenship in India, have been targeted using draconian legal provisions.

Read our statement in full.

… we mean to help your home build another home.

We are looking at helping Delhi where people are still unable to fathom what human storm hit them in February 2020 and why?!.

This is our small attempt from Europe to help restore our collective faith in human kindness. Help us help them:  a small give has a huge take.

Who are we helping? Read here.

Everything else you want to know about these efforts.

At 1200, we march from Brandenburger Tor to the Indian Embassy as part of the Europe-wide #BrusselsChalo

Word is that he will turn up in Brussels on March 13.