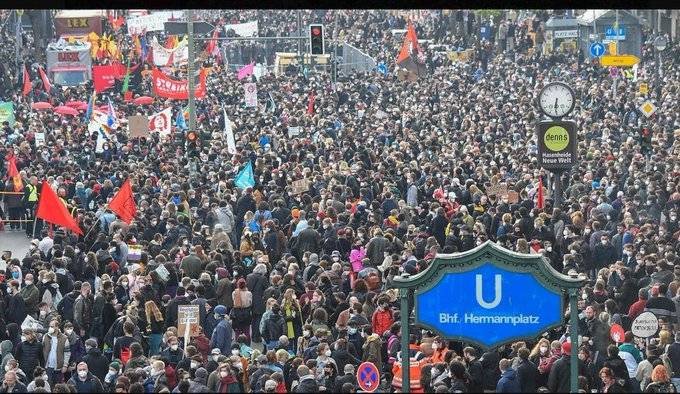 We are now more than a year into the pandemic. At the beginning of the crisis, the ruling classes kept using the word “solidarity”. It turns out they were just trying to co-opt our terminology to let capitalism and nationalism run wild. They talked of solidarity and forced us to feel individual responsibility for the safety and health and well-being of others, while representing the interests of corporations at every turn.
What the last year has shown us is that even in this global crisis, capitalism and its associated ideologies will be used by those in power to protect the interests of the few, at the cost of hundreds of thousands of lives. The rule of the privileged minority rages on as people suffer the consequences of their decadence even during a pandemic.
This is why we have called for a revolutionary, internationalist 1st May demonstration. Only through actions such as this one can we talk of solidarity. Our internationalist block comprises migrant, racialized, and internationalist groups that represent communities from all around the world. And all of our communities experience discrimination and hardship at the hands of the German state. Whether they are South Asian delivery workers, Polish live-in care workers, farm workers or any migrant working precariously – we are all part of the same fight against the same system. Our oppression has different faces: for some it is the access to abortion and childcare, which is deliberately made harder for the working classes; for some it is having to flee oppressive regimes because of their sexuality; for others it is being exploited as part of global value chains for the sake of a cheap garment in a chain clothing shop; yet for others it is the daily experience of racism and exclusion. These issues affect women, those of marginalised genders, and those from marginalised communities the most. And our fight is global, which is why we stand together as an internationalist, migrant alliance. We all experience the oppression of capitalism and what we are fighting for is liberation!
What unites us, the internationalist migrant alliance, is that we all live in this country and in this city. The wealth and health of Germany and Western Europe is built off our backs. And one critical crisis that unites us all is the crisis of the real estate market. The overturning of the Mietendeckel has hit many migrants hard. Migrants contributing to the welfare of Germany have to now scramble to payback subsidies that they rightfully deserve. To call such provisions anti-constitutional demonstrates how far capitalists have infiltrated the state. Hiding behind a veneer of neutrality, they are aiding large scale real estate companies to augment their profits year after year.
When we look at the access to the corona vaccine, the dreadful portrait of capitalism revels itself further. It also very clearly shows how the governments of Germany and Western Europe are actively aiding the continuation of this virus in other poorer nations by supporting stringent intellectual property laws with the excuse of supporting “innovation”, even as the raw materials, labor, and manufacturing is done in the same poor countries which are forced to import these vaccines at exorbitant rates. As if one needs to be innovative to produce life saving drugs. With the premise of competition rather than cooperation and care the system has made us strangers to one another – to be afraid of or to be suspicious of one another. Migrants or people from migrational backgrounds face this suspicion the most as we have seen with the horrible attacks in Hanau and in Berlin. Capitalists are capitalists everywhere, be they in India, in Brazil, in the USA, or in Germany. Yet we must not forget the intergenerational effects of colonialism and imperialism, especially how fascists like Modi and Bolsonaro exacerbate the extraction of wealth from the poor within the militarized borders of these “nation-states”. Exclusionary politics that fuels division and further pauperisation of working people everywhere are the bedrock of their imagination of the future.
We won’t let them sell us what has always belonged to us. We will reclaim what is ours! Our solidarity with each other, our apartments, our jobs, our society, our communities, our streets! We won’t let our solidarity or our city be captured!