We read out this statement at the protest demonstration called by CoLiberation at Hermannplatz on February 13, 2021 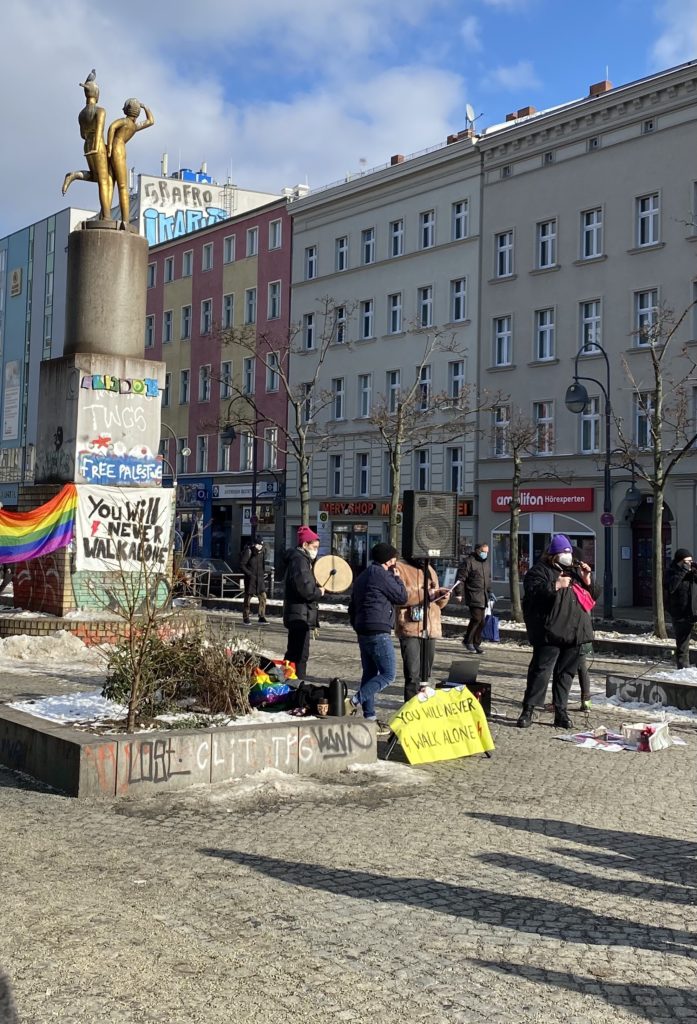 We stand in firm solidarity with the women and people in Poland in their fight for self-determination, bodily-autonomy, and in co-creating a future where abortion is legal; and sexual and reproductive health care is available and accessible.

The systemic power wielded by patriarchal, neoliberal, fascist, racist and casteist states in Poland and India have unleashed deliberate havoc on women’s bodies, health and their right to a life free from violence.

As we speak, India is alight with the fire of resistance as farmers from across the country have been organising for over three months against the regressive farm laws in India. Striking along with their comrades are women farmers and labourers, as they occupy the borders to Delhi and demand their right to shape their own futures. Braving poor sanitation facilities while protesting in the cold and facing the wrath of the police, they continue to make their voice heard. The Indian government is clamping down on them through placing industrial scale physical barricades, raining down tear gas, and shutting off the internet.

Last month, Nodeep Kaur, a Dalit woman and trade union activist who was protesting at one of these border sites was arrested. Since then she’s been tortured and sexually assaulted while in police custody. Nodeep Kaur has faced (and continues to face) violence for resisting and being vocal in ways that have managed to shake the fragile foundations of the casteist and patriarchal Indian state. We will not rest till she is freed.

But our fight is longer. The Polish anti-abortion law, in denying women their autonomy, is similar to the systems of control exercised by Indian brahminical patriarchy. In seeking to control women’s bodies, they seek to control not only their autonomy and choice, but it is part of a broader quest for holding on to caste power by forcing caste endogamy so that wealth and capital remain in the hands of upper castes. By controlling these most intimate aspects of women’s lives, including love and where they seek to find community –  they also seek to dismantle equality.

These systems of control are aided and abetted by global capital. One only needs to remember, how last month, when Jayasre Kathiravel, a 20-year-old Dalit worker at an H&M apparel factory in Tamil Nadu, a state in Southern India, was found dead after reportedly being raped and murdered by her supervisor at the factory, after facing months of harassment at his hands.

It is more urgent than ever to resist common forces of oppression and create communities of care. We join you today in an endeavour to create such a community that can thrive.  We stand together with queer-feminist, socialist, LGBQTI, and progressive alliances to do the work of solidarity, to strengthen one another, and amplify our demands.  Your struggle, organising, and mobilisation has energised and inspired us. We will continue to fight till Polish, and all women can determine their own self-hood and live with dignity.