We gathered at Nettelbeckplatz in Wedding in the wake of the brutal gangrape in Hathras and the institutional coverup that followed. The following statement was delivered in the presence of institutional solidarity from some of Berlin’s intersectional feminist groups. 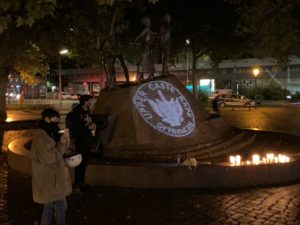 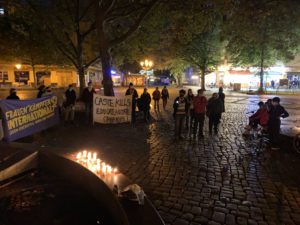 We write this in the wake of the brutal gangrape of a 19-year-old Dalit woman by men of the upper caste Thakur community in Hathras, in Uttar Pradesh, a province in northern India. The violent crime took place on September 14, 2020, and the victim lost her life in Safdarjung Hospital in New Delhi two weeks later.

Members of the victim’s family have said that the local police had refused to arrest any of the accused even 10 days after the crime. The Uttar Pradesh police burnt the victim’s body in the middle of the night without the permission of the family who were locked inside their house. This, it is widely believed, was an attempt to destroy evidence and stall justice.

Since then, the police administration of Uttar Pradesh has repeatedly advanced the theory that no rape took place. The District Magistrate of Hathras (who has since been suspended) called the allegation of gangrape “fake news” and a video emerged showing him coercing the family to change their statement.

The administration has even attempted to accuse the family of fomenting inter-caste violence when all they have done is point out the truth that upper caste Thakur men sit on a history of rape and violence against Dalit women and other lower caste people of Uttar Pradesh. A former MLA from the ruling party, the BJP, has also sought a police investigation against the victim’s family. The Special Investigation Team have taken this victim-blaming to a completely inhuman level by asking for a narco test on the victim’s family, a torturous process without any scientific basis.

Uttar Pradesh is a state under the rule of Ajay Singh Bisht aka Yogi Adityanath, a member of the BJP, the party ruling India’s central government. It is an openly Hindu supremacist fascist organisation. Ajay Singh Bisht is deeply involved in the BJP’s program of remodelling India’s constitutional democracy in the form of a Hindu Rashtra. Among the core tenets of its fascist program is the complete domestication of women and upholding a structure of violence against women, religious minorities, lower caste and Dalits, and the poor. This is amply clear from the aggressive mobilization of state resources such as the police, the bureaucracy and the media towards rape denial, victim-blaming, gaslighting, and forceful weaponisation of upper caste fragility and defensiveness around any conversation around upper caste violence and murder of Dalits.

We call for prosecution of the dominant caste men and police who committed the heinous crimes in Hathras and in all other recent cases, and demand that the attacks on activists and journalists and the repression of dissent in India stop immediately. Justice for Dalits can only become possible with the annihilation of caste.

Intersectional feminist organisations and activists working in Europe are important for amplifying such incidents of gross right-wing upper caste misogynist abuse of power and violence, state denialism, and the dehumanisation of rape victims and abusers in the form of extremely problematic media and public discourse around sexual violence and its identitarian intersections. This is an international issue. Caste hegemony works as a sort of open secret that international academics and “expats” and “diaspora” are involved in upholding because of their own privilege, there is very little recognition or interest in the historical violence against Dalits, Scheduled Caste and other marginalised people of India. There is also very little knowledge within international activist communities regarding this.

These organisations must extend solidarity towards this issue of casteist sexual violence, centering victims and survivors, and ensuring international intersectional feminist solidarity.